I found this old Bonhams catalogue from 1999 on eBay recently, and it’s got a good selection of costumes and props from a range of eras of Doctor Who.

There are some amazing costumes listed in this sale, many of which haven’t seen the light of day since. It would be amazing to know where they are!

As usual I have separated the items by Doctor era, and you can see the rest of the items here:


Here are just the lots relating to the Eighth Doctor era


Lot 128
Doctor Who
A ‘New Revised Draft’ script for Doctor Who The Movie screenplay by Johnny Byrne, never actually filmed or produced.
Estimate £1000-1500
Posted by Steven Ricks Tailoring at 07:37 No comments: 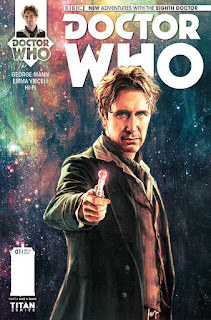 For a little while now, I have been reporting on the Tenth Doctor Titan Comics covers, featuring previously unseen photographs.

Issue One has a beautiful painted cover by artist Alice X. Zhang, based on the Night Of The Doctor photocall.

Also available are two variants, one of which has art by Warren Pleece.

The other is a photo variant, using a previous unseen image from Paul McGann’s photocall from Night Of The Doctor.

I’d love to see more of these shots! 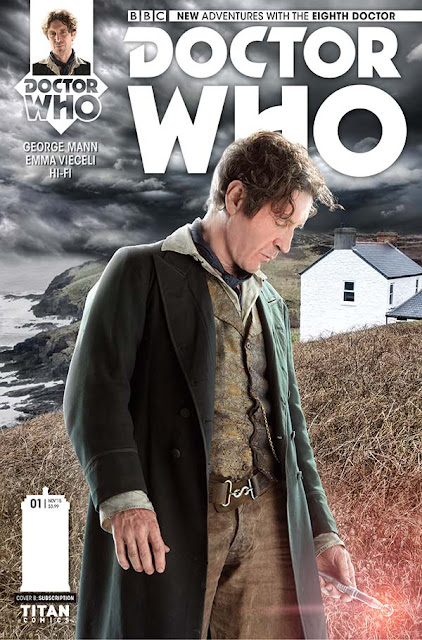 Posted by Steven Ricks Tailoring at 09:58 No comments:

As well as getting a great photo opportunity with Paul McGann and the original TARID console, I also had two official photoshoots with him. 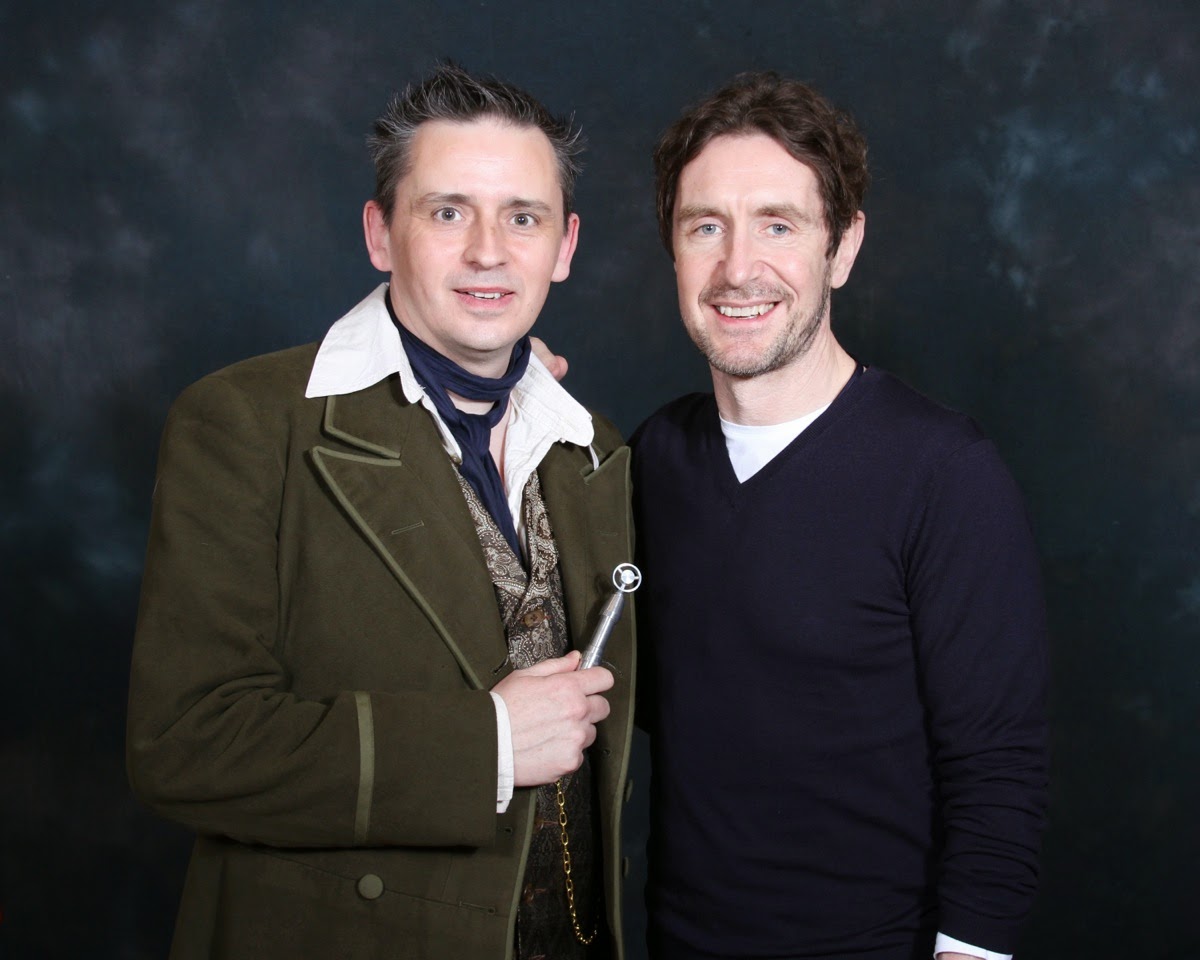 One was a single, the other with Emma Campbell-Jones who played the Cass, the pilot of the crashing spaceship in Night Of The Doctor. 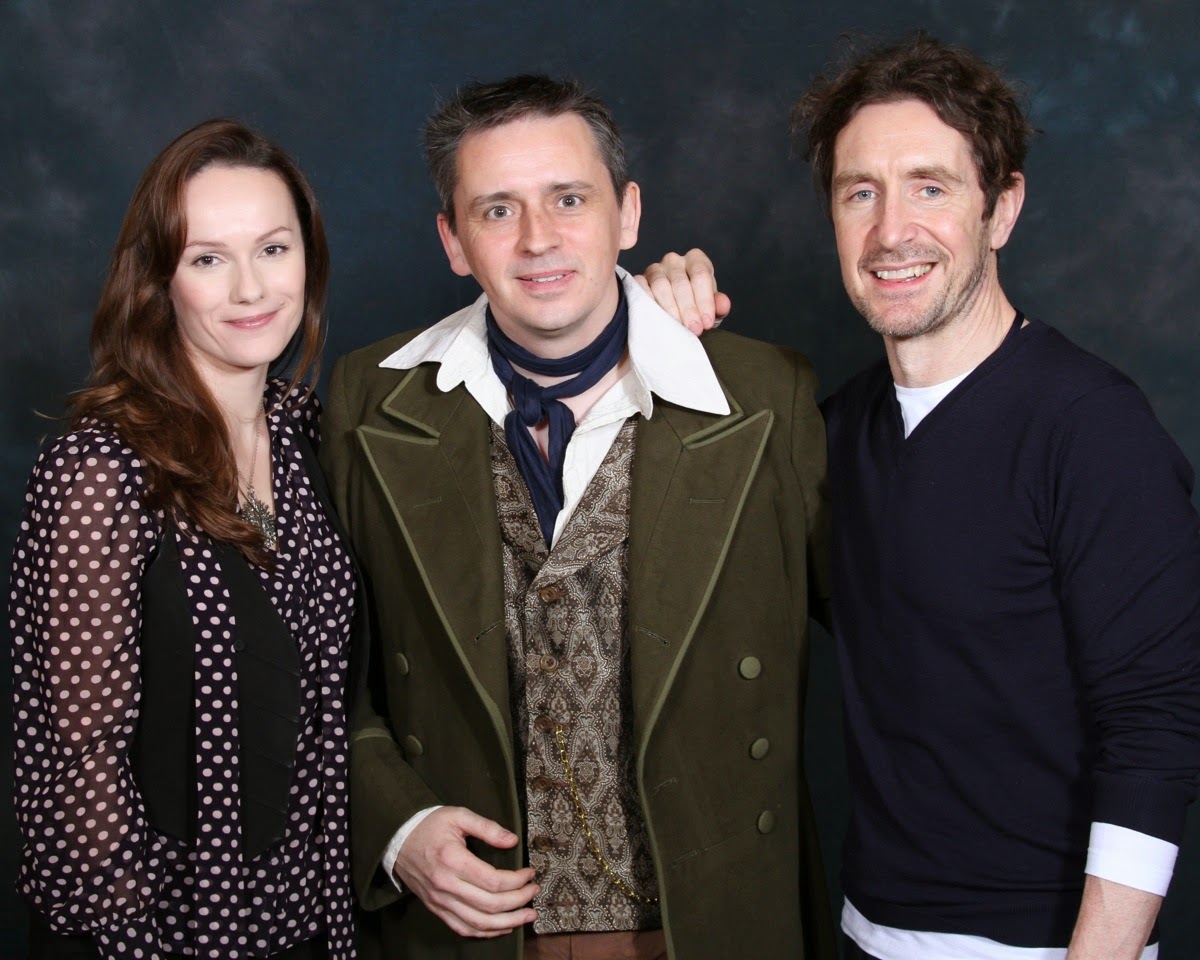 This last weekend saw the 25th Gallifrey One convention in Los Angeles.

As part of the activities on offer, there is the chance to have your photograph taken with the screen-used TARDIS console from the 1996 tv movie. 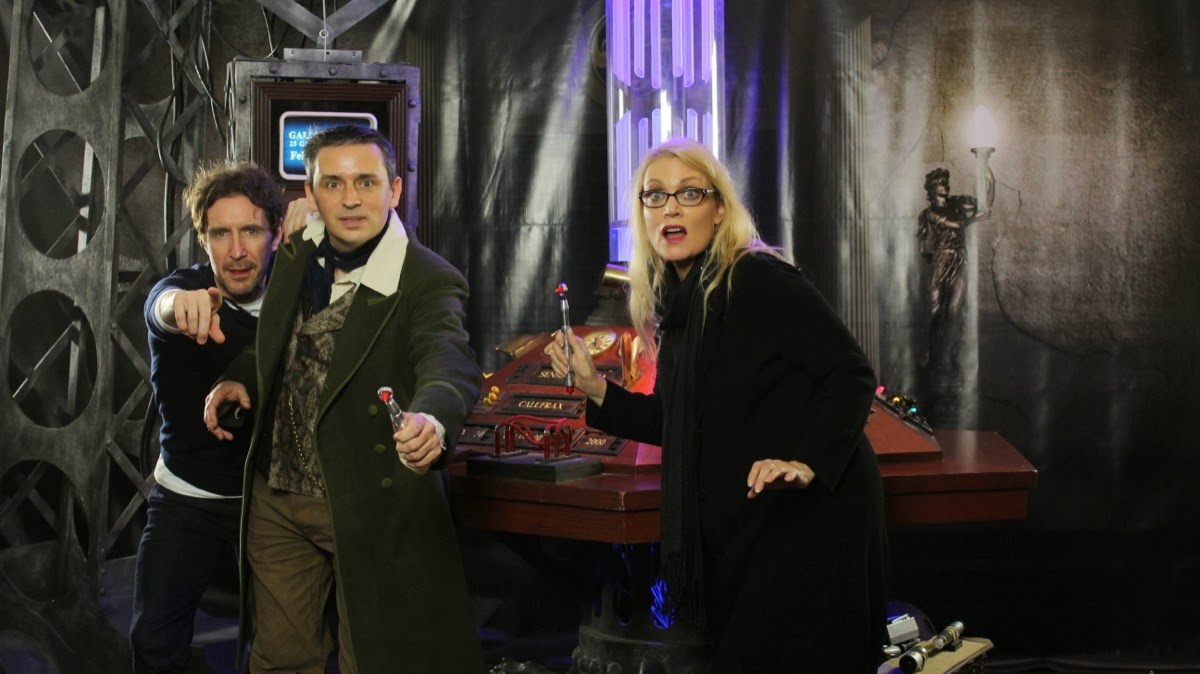 Since Paul McGann and Daphne Ashbrooke were in attendance, there was the opportunity to have a unique photoshoot with the lead actors as well.
I signed up and had my chance directly after my Advanced Tailoring panel on the Sunday afternoon. 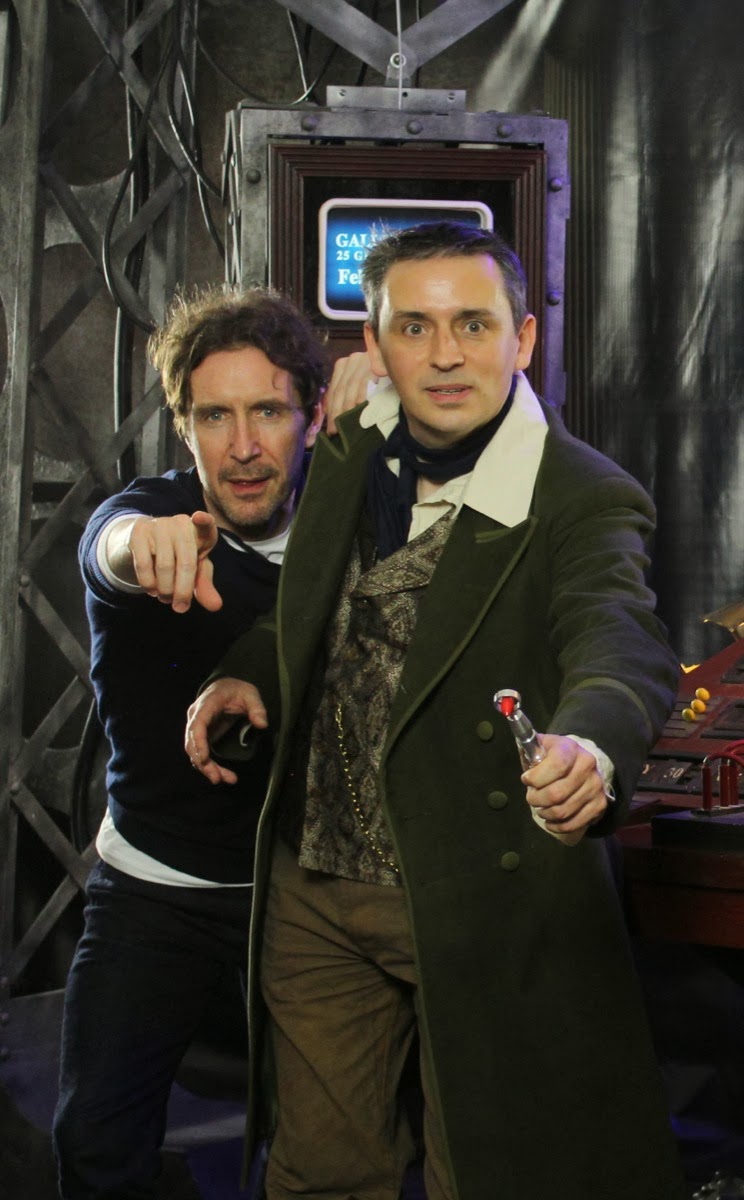 Paul recognised me from the couple of official photoshoots earlier in the weekend, and once again he was very taken with my coat.
After taking the shot I was a bit cheeky and asked if he’d like to try it on. There were some panicked faces around the room, but Paul was more than happy.

Sadly it was a little large for him, but he seemed to like the feel of it. 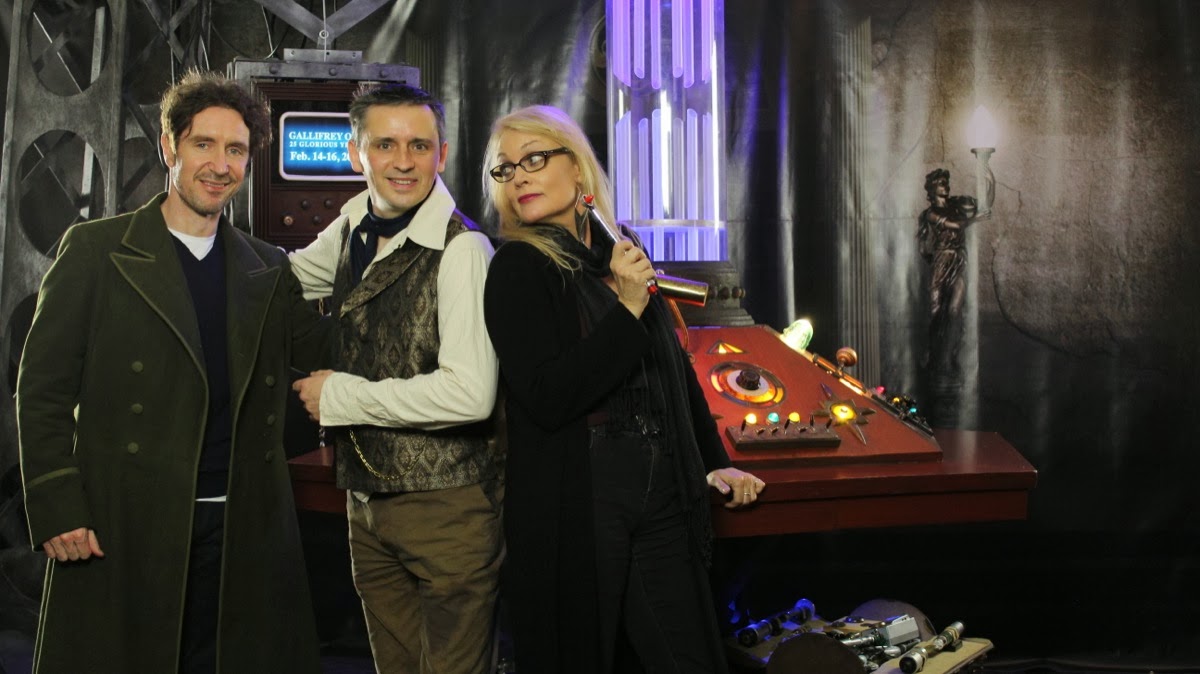 I was then doubly cheeky and asked if we could get a quick shot of him in the coat. Faces around the room looked even more panicked, but Paul was again more than game and he was happy to pose with me.

I’m very proud that Paul liked the coat, and was happy to pose in it for me. Thanks Paul!!
Posted by Steven Ricks Tailoring at 13:27 2 comments: 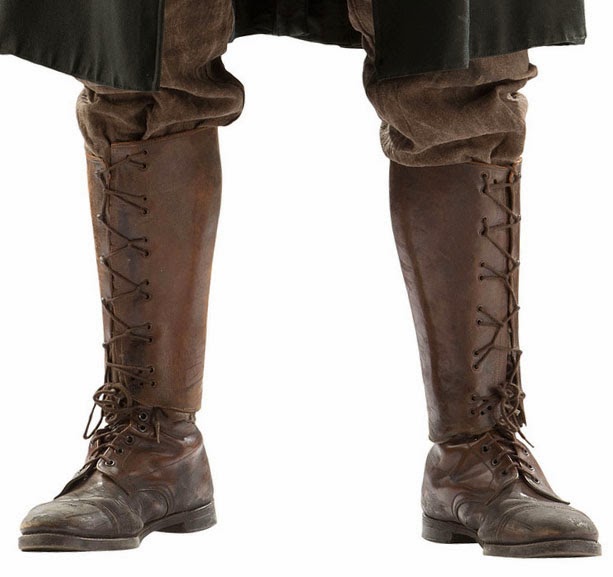 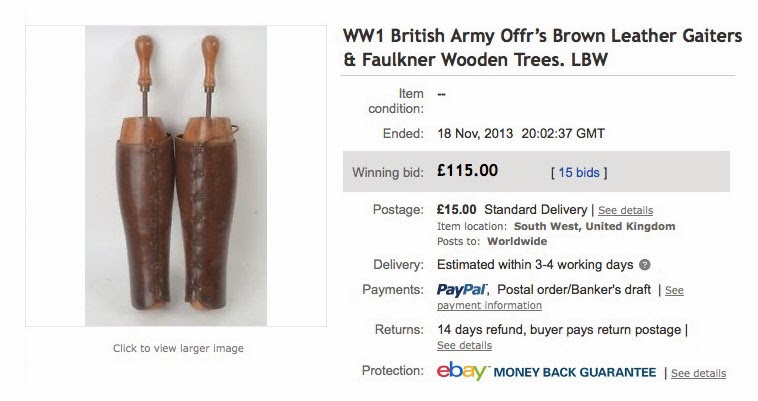 The 50th Anniversary week is almost here, and as expected the cover of the latest Radio Times features The Doctor - not just once, but TWLEVE times!

The sources of the images used are quite interesting, the majority of which are from the Radio Times own extensive archive of Doctor Who images. All are out-takes, so are being published for the first time.

The First and Second Doctors come from the 10th Anniversary Special published by the Radio Times in 1973. The Third Doctor comes from a photoshoot in 1970 for the launch of Jon Pertwee in the role.

The Fourth, Fifth, Sixth and Seventh Doctors are pictured from the shoot for the 30th Anniversary special, which featured in the 1993 Children In Need.

This shows that they were all taken separately before being composited into the group on the cover.

The rest of the Doctors come from bespoke cover shoots done for the Radio Times in more recent years. For example the Ninth Doctor is from the gatefold cover which launched the new series in 2005; and the Tenth from The Next Doctor in 2008. The Eleventh and War Doctors are obviously newly taken.

Here’s the full size version of the Eighth Doctor’s cover. 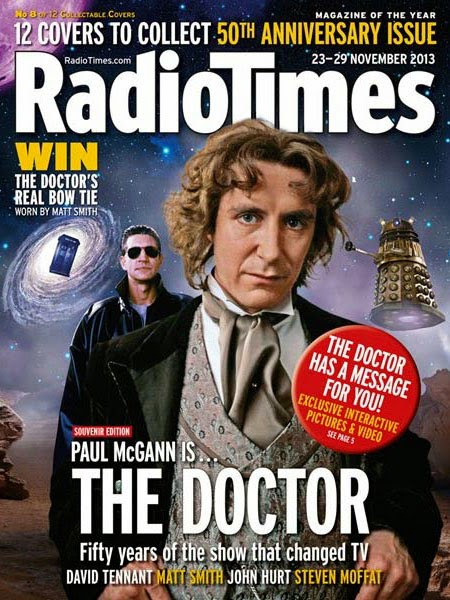 Finally, have you noticed that all 12 covers join together to form a long single image?

Posted by Steven Ricks Tailoring at 09:07 No comments: